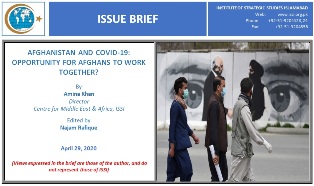 Like every other country in the world, Afghanistan has also been affected by the Corona virus also known as COVID-19. On March 22, Afghanistan reported its first fatality in the Balkh province.[1] This was followed by a second fatality in Herat. Within a span of a week, the total number of cases had reached 174, a majority among them individuals returning from Iran.[2] Moreover, there have been reports that around 40 members of President Ashraf Ghani’s staff have been infected by the Corona virus.[3]

As of April 25, 2020, the total number of confirmed COVID-19 cases stands at 1,463.[1] According to the Afghan Ministry of Health, 47 people have died due to the virus, while 188 have recovered.[2] However, there are concerns that the number of actual cases is much higher, since there are limited testing available and poor health facilities including a lack of ventilators. The current state of affairs in Afghanistan is already marked by political uncertainty – there is the ongoing Ghani-Abdullah feud, the continuing hostility between the Taliban and Kabul despite the US-Taliban peace deal signed in February 2020, as well as weak institutions and an extremely fragile economy. This makes dealing with the virus all the more cumbersome. Afghanistan’s already weak health ministry is struggling to deal with COVID-19, and even as the World Health Organization (WHO) has given 1,500 testing kits, the country possesses only two laboratories that can provide credible results.[3] Moreover, decades of conflict have led to a neglect of the health sector, which is evident from the fact that according to official figures, only 300 ventilators are available in the country.[4]

Issue Brief on “Covid-19: US Pledges Cooperation with Pakistan”

Issue Brief on “Demonstrations in Lebanon: Between Poverty and The Pandemic”