Home ISSI Publications Articles Issue Briefs Issue Brief on “The ICJ Verdict on Jadhav and What It Means... 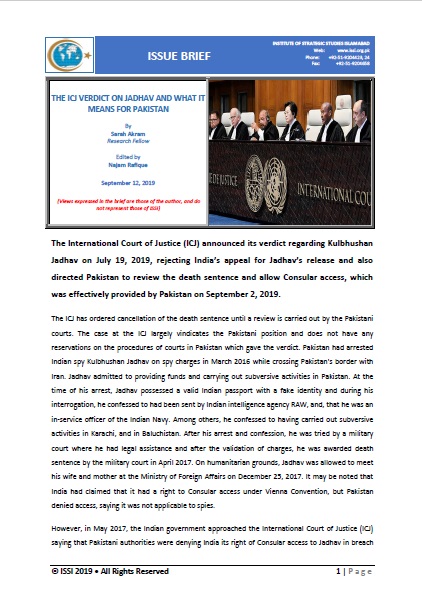 The International Court of Justice (ICJ) announced its verdict regarding Kulbhushan Jadhav on July 19, 2019, rejecting India’s appeal for Jadhav’s release and also directed Pakistan to review the death sentence and allow Consular access, which was effectively provided by Pakistan on September 2, 2019.

The ICJ has ordered cancellation of the death sentence until a review is carried out by the Pakistani courts. The case at the ICJ largely vindicates the Pakistani position and does not have any reservations on the procedures of courts in Pakistan which gave the verdict. Pakistan had arrested Indian spy Kulbhushan Jadhav on spy charges in March 2016 while crossing Pakistan’s border with Iran. Jadhav admitted to providing funds and carrying out subversive activities in Pakistan. At the time of his arrest, Jadhav possessed a valid Indian passport with a fake identity and during his interrogation, he confessed to had been sent by Indian intelligence agency RAW, and, that he was an in-service officer of the Indian Navy. Among others, he confessed to having carried out subversive activities in Karachi, and in Baluchistan. After his arrest and confession, he was tried by a military court where he had legal assistance and after the validation of charges, he was awarded death sentence by the military court in April 2017. On humanitarian grounds, Jadhav was allowed to meet his wife and mother at the Ministry of Foreign Affairs on December 25, 2017. It may be noted that India had claimed that it had a right to Consular access under Vienna Convention, but Pakistan denied access, saying it was not applicable to spies.

Issue Brief on “Ensuring Rights for All: Kamala Harris and Hope for Kashmir”

Issue Brief on “Indian Chronicles : An Eye Opener for the World Community”