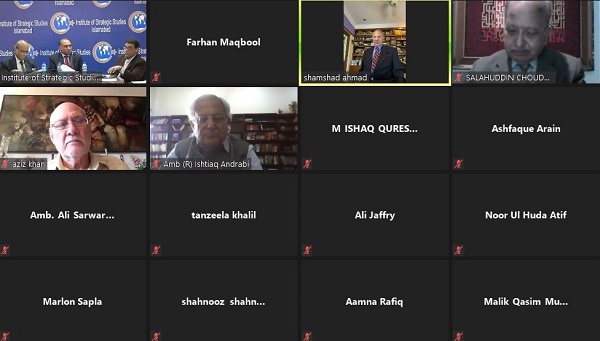 The Future of Indian Occupied Jammu & Kashmir Under the UN Watch
October 1, 2020

The webinar was moderated by Mr. Najam Rafique, Director Research ISSI who stated that the webinar today is in the context of the speech by the Prime Minister of Pakistan, Mr. Imran Khan, to the UNGA on September 25, 2020 in which he had once again called the attention of the international community to the Indian occupation of Kashmir and its illegal actions of August 5, 2019. The PM, he said, had flagged these actions as war crimes and asked the international  community to persecute the Indian civil and military officials involved in state terrorism.

In his introductory remarks, the Director General ISSI, Ambassador Aizaz Ahmad Chaudhry, while expressing his views said that the Kashmir issue has continued to resonate in the corridors of the UN but has not reached its logical end. He pointed out that the Prime Minster of Pakistan has been raising this issue of Kashmir at the UNGA very effectively. Ambassador Chaudhry also said that many nations have turned a blind eye to the issue of IOJK and the reasons can be numerous, like commercial interests.

The keynote speaker at the webinar, Ambassador Shamshad Ahmad, stated that Prime Minister Imran Khan has very effectively raised his voice in the UN on the Kashmir issue and has reiterated Pakistan’s position on Kashmir while describing Modi’s India by drawing parallels to Hitler’s fascist rule. He said it is for Pakistan to be realistic and focus more on action. He emphasized that the foreign office of Pakistan is taking all actions that it must take in this regard. He also said that the UN resolutions have lost their meaning and India must be named and shamed in the international arena in order for this issue to be kept alive. Moreover, he said that we must engage with human rights bodies of the UN in order to highlight Indian atrocities.

Ambassador Aziz Ahmad Khan said that with regards to the UN role regarding Kashmir, it can be said that it has not been relevant and the UN only takes interest where the big powers are involved. He further said that while it has been an uphill task to keep the issue alive, Pakistan must keep on emphasizing the human rights violations by India, send delegations to important capitals highlighting the Indian atrocities, interact with Kashmiri Diaspora, remain watchful of the violations and infiltrations from the Indian side, and continue its diplomatic efforts.

Ambassador Ishtiaq Andrabi pointed out that the Kashmiris have always resisted foreign occupations and their struggle has always continued against foreign invaders. He further said that the Kashmiris have a special bond with Pakistan and Prime Minister Imran Khan spoke with conviction at the UNGA, highlighting the violations against the Kashmiri people. He said that while all means have been used to crush the Kashmiri voices, but they have shown remarkable resolve in the face of oppression. Furthermore, he said that we must develop consensus on the Kashmir issue on the national level, the Kashmiri Diaspora and Pakistani expatriates must also be engaged.

In his concluding remarks, Ambassador Khalid Mahmood, Chairman BOG, ISSI said that while we need to spread awareness about this dispute in the international arena, India’s actions of August 5 have again internationalized the dispute and the UN Secretary General has also shown sensitivity to this issue. He said that we must not stop working and continue persuading the permanent members of the United Nations Security Council with regards to this issue. Moreover, he said that Pakistan must continue to spread awareness about this dispute. He said that this dispute has entered a new phase and this must be highlighted at all levels.