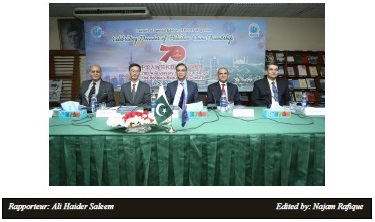 The China-Pakistan Study Centre (CPSC) at the Institute of Strategic Studies Islamabad (ISSI) organized the launch of special edition of its PIVOT magazine on September 24, 2019. Ambassador Moazzam Ahmad Khan, Special Secretary, Ministry of Foreign Affairs graced the launch as Chief Guest. H.E Mr. Yao Jing, Ambassador of the People’s Republic of China also attended the ceremony. With the 70thAnniversary of the founding of the People’s Republic of China approaching, seven decades of Pakistan-China friendship were also celebrated at the occasion which was commemorated by a cake-cutting ceremony.

In his introductory remarks, Director CPSC, Dr. Talat Shabbir said that the launch of the fourth edition of PIVOT magazine reflects the eagerness of contributors and sponsors to be a part of this celebration. He thanked his team, the contributors and the sponsors for making PIVOT a success. He went on to say that the relationship between Pakistan and China draws its strengths from principles of mutual trust, economic cooperation, common goal of prosperity and shared destiny. The China-Pakistan Economic Corridor (CPEC) is now an all-inclusive mega venture which is a testimony to the will of the people of China and the leadership. Their commitment, focus and hard work have transformed China into a modern day success story for the rest of the world to follow. With the advent of CPEC, Pakistan and China have more avenues in key areas essential for development and prosperity. He conveyed best wishes of the people of Pakistan to China as it celebrates the auspicious occasion of its National Day.