While a whirlpool of economic activity grips Asia, the need to forge well-rounded relations with one’s neighbors is becoming more and more nuanced. Pakistan’s geostrategic location in South Asia is ideal for various initiatives of regional connectivity despite its close proximity to a troubled state like Afghanistan. Opportunities are arising for enhancement of cooperation under the aegis of the regional connectivity initiatives that China is promoting such as the Belt and Road Initiative in general and the China Pakistan Economic Corridor (CPEC) in particular. While China and Pakistan enjoy a deep abiding friendship with one another, Iran’s outlook towards these two countries is also based on principles of brotherhood and solidarity. On the sidelines of the 71st UNGA session in September 2016, the Iranian President Hassan Rouhani expressed Iran’s desire to join CPEC for furthering regional participation.

As the world faces disparities and divides on several fronts, the need to assuage these gaps has become even more imperative. The humanitarian crises in Syria, Yemen, Kashmir, Palestine and several other countries are all dire indicators of the prevalent divide that exists in the world at the moment. With such multilateral initiatives, regional integration can be enhanced which consequentially translates into global peace. Iran being a gateway to the Middle Eastern countries can help connect those countries to the economic development underway in the Asia-Pacific. CPEC as a testing ground for promising economic opportunities is what could bring these three states even closer together. Cultural exchanges and joint projects can bring about an air of understanding that otherwise lacks from the picture due to several compelling factors. It has been time and again reiterated by all three heads of states and their representatives that Gwadar and Chahbahar ports are meant to function with cooperation instead of competition. Their proximity and purpose could even lead them to become sister ports in the future as well. This would be yet another validation for this ‘trident’ in question that can easily aim to weed out naysayers and negative forces from the region, for the collective good.

In this regard, Institute of Strategic Studies Islamabad organized a one-day conference on “Pakistan-China-Iran: A Trident of Regional Connectivity” on December 19, 2017. The conference brought together diverse groups of professionals from all three countries. The purpose of the conference was to analyze this trident and its many facets and to give policy proposals for the practical implementation of this idea of integration.

For this purpose, the proceedings of the conference were divided into three sessions with the following themes:

What can be the different facets of this cooperation? (economy, geostrategic stability and security)

What are the major regional initiatives by either of these countries that are aimed at connectivity?

Report – Webinar “Taliban in Power – A Year On” 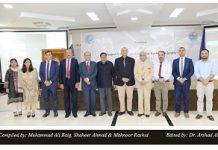