Our esteemed Keynote Speaker, Gen. Khalid Ahmad Kidwai, Excellencies, Distinguished Panellists, Ladies and Gentlemen, it gives me great pleasure to welcome you all to the Institute of Strategic Studies. General Kidwai has had the privilege to serve this nation with great distinction. He remained at the helm of Strategic Plans Division in its formative, and most critical, years. It is a matter of great pride for the entire Pakistani nation that our nuclear capability has proved to be an effective deterrence against aggressions from our east. In making our deterrent robust, General Kidwai has played an important role. We are glad that he has accepted to give a key note address in this seminar. We are also grateful for the presence of Ambassador Zamir Akram, who has served our country in numerous positions, including as our Ambassador to the Geneva-based Conference on Disarmament and as Permanent Representative to the United Nations in Geneva. Thank you Zamir for agreeing to chair this session. Our speakers in today’s seminar are mostly from the academic world. On behalf the Institute, I welcome Dr. Rizwana Abbasi, Dr. Zafar Khan, Dr. Zafar Nawaz Jaspal, and Dr. Mansoor Ahmad. Ladies and Gentlemen, As you are well aware, the world around us is changing rapidly. US now regards China, and Russia, as its competitors, even rivals. US’s Indo-Pacific Strategy, which has just been elaborated by Pentagon, is being perceived largely as a China containment policy. Multilateralism is being marginalized. Unilateralism is on the rise. Anti-globalism, trade wars, xenophobia, and narrow nationalism are challenging the foundations of the world that was erected after the second world war. Walls are going up. Bridges coming down. In the backdrop of this grim geo-political scene, one serious challenge is the fast deterioration of international security environment. The arms control understandings between the US and Russia are collapsing. In just two months, August 2019, INF (Intermediate range Nuclear Forces) would be formally terminated, removing any restrictions on the development of intermediate and short range ballistic missiles with the range of 500 to 5500 km. The New Start agreement, if not renewed in 2021, would remove limits on the US and Russian nuclear stockpiles and their delivery systems.US NPR (Nuclear Posture Review) 2018 has decided to modernize its nuclear infrastructure and capabilities. New arms races are emerging. 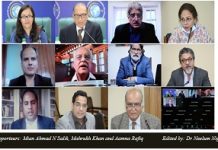 Report – Panel Discussion on “Economic Security and Geo-Economics: Challenges and Opportunities for Pakistan”

Report – Roundtable “OIC through the Decades: Challenges and Opportunities Ahead” 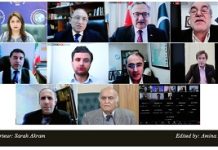